Between 3 and 18 August 2019, the 63rd edition of the International Trade Fair of Asturias, one of the main exhibition events of the Northwest of Spain, was held in Gijón (in the region of Asturias), which on this occasion has been visited by 724,314 visitors. The Government of the Principality of Asturias has dedicated its pavilion to the Camino de Santiago, with the exhibition “The Way that was born in Asturias”, in which a complete tour of the history of the Jacobean routes was made from its origin to the present. In this Jacobean exhibition, a space has been dedicated to showcasing innovation projects related to the Camino de Santiago, among which the “Creative Loci Iacobi” initiative has played a leading role. 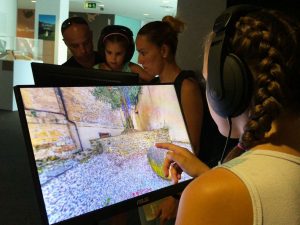 Asturias participates in “Creative Loci Iacobi” with a digitization project based on the Cathedral of Oviedo and its Holy Chamber, a place that’s intimately bound to the origins of the Jacobean phenomenon at the beginning of the ninth century, when in times of the Asturian Monarchy, the tomb of the Apostol Santiago was found in Compostela.

A virtual tour has been made around the Cathedral and its historical reliquary, the Holy Chamber, whichafter Santiago, was the second highest site of devotion and pilgrimage during the Middle Ages in Spain. Also included in the project, we can find 3D digitized models of the most outstanding art pieces found in the Holy Chamber: The Holy Ark (as seen before and after its restoration in 2017), The cross of the Angels and The Cross of Victory, The Agate Casket of Oviedo and the Nicodemus Christ.

High Definition photographs were taken of all of these items, allowing the creation of the 3D models using Photogrammetry Techniques which created High Resolution images with more than 1.000.000 vertexes per item, 200.000 in their adaptation form for mobile phone use.

The involvement of Asturias in this project also includes a creative map of fifty monuments associated with the routes of the “Camino de Santiago” that pass through Asturias (Primitivo Route, Coast Route and Salvador Route).