THE PATHS OF SAINT JAMES IN EUROPE 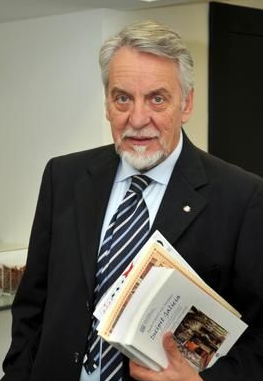 The cornerstone of any evocation of the pilgrimage to Santiago de Compostela and any other medieval pilgrimage is undoubtedly the richly illuminated manuscript, written around the middle of the 12th century and known as Liber Sancti Jacobi, or even of Codex Calixtinus because of the letter attributed to Pope Calixte which serves as an introduction to him.

In this text, of exceptional historical importance and extraordinary efficiency, we already find all the elements that allow us to draw the characters of the pilgrimage, the figure of the pilgrim, the forms of the cult of Saint James and the close ties that, from the start, are established with Europe. In the fourth book of the manuscript indeed appears the first strong link, declared, programmed, with European culture, the first explicit will to take the cult of Saint-Jacques de Compostelle beyond the Pyrenees, to link it to the great cultural ferments of which Cluny’s order interpreted the spirit and made itself the promoter.

The link is explicit and is provided by this fourth book of the Codex Calixtinus which reports what is called the Historia Turpini, verablecronica gestorum in Latin, which tells a series of Carolingian legends linked to jacquaire traditions. The fact that this text was chosen and joined, in a single manuscript, to the others leading the worship and pilgrimage to Saint-Jacques de Compostelle, clearly demonstrates the intention of wanting to link Saint-Jacques to Charlemagne, benefactor and protector of pilgrims, According to an autodignification process which has two poles: the cathedral of Saint-Jacques de Compostelle, which is said to have been founded by this same emperor, and the Cluniac monastic circles, particularly interested in linking the pilgrimage of Saint-Jacques de Compostelle to French culture and civilization.

This link beyond the Pyrenees is also looked for in the second Codex book where, of the twenty-two exemplary miracula that are reported, most of it refers to French, Italian and German pilgrims with a carefully targeted geographic distribution, clearlly, is the goal of keeping this cult alive in a few specific areas of the western world. Four of the miracles even happen on the sea lanes that lead to the Holy Land with the obvious intention of indicating Saint James as the protector of all pilgrims, which is the place to where they are headed.

A vision that we find confirmed in the “Fifth Book”, where the routes to Santiago de Compostela are deeply rooted in France and connect to the great European road network, both to Central Europe and to the South, determining a continual exchange of knowledge and relationships with the whole medieval Christian world and, along the southern routes, with the Islamic world.

The persistence of these routes to the present day, the reception structures intended for the accommodation of pilgrims, the system of worship and the devotions which are present there played a decisive role for the continuity in the time of the pilgrimage to Saint -Jacques de Compostelle and have become their own reminder, symbol, sign and memory. It is in this sense that their protection and maintenance have absolute priority.

When we speak of the pilgrimage to Santiago de Compostela as a cultural and spiritual root of Europe, we must not forget the role and contribution made up by the figure of the pilgrim. The pilgrimage was for them a knowledge of the active world, linked to an unforgettable personal experience inserted in a system of values ​​which will accompany them for the rest of his days. It is to them that we owe the roots in the territory, the permanence in the collective memory, the diffusion of the civilization of Santiago de Compostela in all strata of society.

Of great importance for the Renaissance of the Pilgrimages to Saint-Jacques de Compostelle were the converging positions of John Paul II who, on the occasion of his visit to Saint-Jacques de Compostelle for the holy year 1982, made pilgrimage to Santiago de Compostela a constitutive element of the Christian roots of Europe, and those of the Council of Europe which, from the secular point of view, launched by the Declaration of Santiago de Compostela (23 October 1987) are program: Camino de Santiago, European cultural itinerary, highlighting its cultural, artistic, social and civic components. He joined the position in 1993 for the UNESCO that is planted in the protection of the assembly of cultural cultures and artists present along the Camino de Santiago, declared “World Heritage”; in 1998 for France.

Finally, we must underline an important consequence of the renaissance of the pilgrimage of Santiago de Compostela: its great vitality and its international success have stimulated the revival and the resumption of pilgrimages to all the other major destinations. A great season is emerging where Rome, Santiago de Compostela and Jerusalem will once again be united through a network of routes that can be walked in all directions. These same ferments are noticed on the paths to Mont Saint-Michel, Rocamadour, Monte Sant’Angelo, Lorette, Assisi, Le Puy-en-Velay, Conques…

We are on the threshold of a new great civilization of pilgrimages: the great people of pilgrims will be the protagonist and the jealous guardian.